Stuffed squid with chorizo, corn, tomato, and Mexican spices grilled to get the charred flavours then gratinated in the oven with tomato and cream sauce topped with cheesy mozzarella.

When I was working as a chef in Sydney, we used to have a Filipino food festival every year and each year we would get down a chef from the Philippines to run this festival and one of the dishes he would constantly have on this menu was stuffed squid but with Filipino flavours, it was the most annoying thing to do because we had to stuff around 1000 tiny squids!!! thank god I don’t have to do that anymore phew!!!!

Stuffed squid is one of the easiest and flavoursome one-pot seafood dishes. After stuffing 1000 squids I realised how easy is it to replicate this dish in an easier way but still keeping the essence of the dish by adding maximum flavour with a few tricks I learnt along the way.

For this recipe, you can use calamari, squid or cuttlefish. These all come from the same family of ‘Cephalopoda’ ( This a technical name)

How to stuff squid?

It’s very easy to stuff squid, you would sometimes come across squid that is open on one side or both sides, it doesn’t matter for this recipe, you can simply use toothpicks on both sides of the squid tube if it has both sides open. In any given stuffed squid recipe the first step is to make a stuffing. I made a chorizo and corn-based stuffing which is ultra-delicious, I always loved the combination of squid and chorizo. If you don’t like to use chorizo you can use a few other options.

How to cook stuffed squid in the oven?

The best way to cook stuffed squid is to firstly pan-fry If you have a grill pan then it’s much better. NEVER put the squid in the oven straight away. Just think of it as a piece of meat, you would never put it straight to the oven without pan-frying it. Because if you put the squid straight into the oven it would release the moisture into the pan and it will taste watery and bland. When charred in a pan, the moisture will be released and evaporated. To add more flavour to cuttlefish, you need to give the charred taste.

NEVER cook cuttlefish with a lid on, what happens when you cook with a lid on is that it gets boiled in the pan and again releases a lot of water into the dish.

First char grill then finish it off in the oven to gratinate the stuffed squid.

What to serve with stuffed squid?

Stuffed squid can be simply served with a side salad, creamy mash potato, polenta or grilled vegetables. The dish I have created can be served with mashed potato or a Foccacia bread to soak up all the yummy goodness in the sauce.

I can bet you that you will lick the sauce off the plate if you don’t have bread. (My dinner roll recipe)

It’s very easy to overcook squid. if squid is overcooked then it becomes rubbery. When it’s first charred in the oven make sure it’s not cooked on a low heat for a long time. It needs to be on high heat for a maximum of 2 minutes on both sides just to get the flavor infused.

Watch how to make stuffed squid 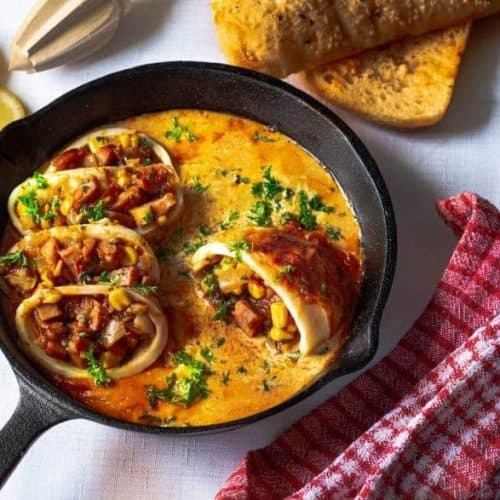 How to cook stuffing

How to cook squid in the oven