Greek Moussaka is a Greek dish layered with eggplant & meat sauce topped with a thick layer of bechamel sauce. Well basically it is a moussaka lasagna, but instead of pasta sheets, eggplant is used in this dish.

When I was studying in France, naturally all the overseas students become a click, the outsiders hahahhaha so that’s when I met my friend who is greek and he would make the best moussaka recipe and whenever I asked him for the recipe, he never had one, because he made it with a little bit of this and a little bit of that hahaha. Well after living with my friends for more than 3 years, I think I was able to somewhat replicate his moussaka 🙂

I have been making greek moussaka for several years now, but I really wanted to taste a traditional greek moussaka, so what better place to taste it than in Greece. I was quite surprised about the moussaka I tasted in Greece. I think here in Australia, we pack it so much with spices and flavours, but over there in Greece it’s very simple and pure in flavour not many spices packed into it but you can taste all components.

Now I did realise my friend also used potato sometimes in the moussaka, it did differ from time to time and then when I was reading about moussaka, there is a version that is made with potato. I will do the one with eggplant because that is what I tasted in Greece.

I have done a beef moussaka, but traditionally it is made with lamb.

Moussaka layers are basically layers of eggplant, meat sauce and finished off with a thick layer of bechamel sauce. We also top it off with panko breadcrumbs for that crunchy top

How to cut eggplant for moussaka

To prepare eggplants for moussaka, you need to cut them lengthwise, so you have nice long strips. you can also cut them as rounds, but it is too many eggplants to grill and prepare, long slices will make it much easier and efficient

How to prepare eggplant for moussaka

There are a few several ways to do it and it doesn’t matter how you do it because it will all be baked together at the end. You can deep fry it, grill it on a grill pan or bake it in the oven. I will be baking in the oven because it is faster, can do it in one go and it is healthy.

Oh did I fail to mention, greek eggplant casserole also known as moussaka is a great dish for a low carb meal? Double points hooray, your skinny jeans will thank you later.

This is a great dish to have on a mid-week menu, house gatherings, entertaining guests and also a great make-ahead dish that can be just baked before serving.

How to make moussaka in advance

You can layer all ingredients and leave it in the fridge, just before serving sprinkle bread crumbs on top and bake it in the oven

How to reheat moussaka

Moussaka can be reheated in the oven at 180c until heated through or it is also reheatable in the microwave. But best served when baked just prior to serving

What to serve with moussaka

You can also check my other main dishes here

Watch how to make Greek moussaka

Step by Step recipe on how to make Greek Moussaka 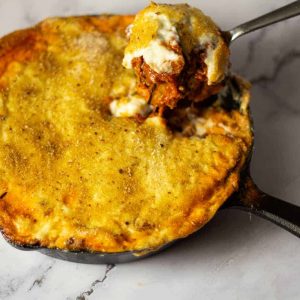