Honey and soy chicken is the all-time favourite marinade. if there is one marinade that does not get outdated that’s honey soy, it can be applied on kebabs, chicken thigh, chicken wings. it’s such a versatile marinade. This is going to be an ultimate BBQ dish that is sticky, glossy, flavourful!!!! YUM YUM YUM

This recipe is best cooked on a BBQ or grill pan, but if you are cooking for an everyday meal, you can use a normal frying pan to cook this dish. The only difference when using a BBQ or a grilling pan is that because of the grilling technique, it amplifies the chargrill taste notes and flavour.

What cut of chicken to use for honey and soy chicken

This dish is cooked on high heat. when a slice of meat is exposed to high heat it’s very likely to dry out very quickly. the chicken thigh can withstand heat and not overcook very easily. therefore use chicken thigh as it will give good flavour and succulence

Well as you are well aware by now, I develop meat products for major retailers and in a few of my past employments, I did develop the honey soy that you can buy in the major retailers now. but when developing for retailers there is always a cost component involved, therefore, you can never develop good honey soy for retail. you can actually test that by looking at the ingredients listed on the back of the pack. There is not much honey in the product.

So in this recipe, I am going to show you how to make your own honey soy marinade which is soooo simple to make and also to make it cost efficiently while not tipping the whole bottle of honey to make the marinade. Good honey is expensive

What to serve with honey soy chicken

What you need for honey soy chicken

To make the marinade and sauce all you need is honey, soy, garlic, brown sugar, ginger its that simple to make. There are two parts to this marinade.

Firstly the chicken needs to be marinated in the honey soy marinade for at least 2 hours preferably overnight.

The second part is the honey soy marinade needs to be cooked in a pot so it turns to a sauce so it can be poured over the chicken and half of it will be used to baste the chicken while cooking as well.

The reason why we need to cook the marinade to make the sauce is that the marinade it self will be liquid but cooking it and adding corn flour will make it thick and lucious and will have enough body to be glazed as well.

You can also check my other dinner recipes

Watch how to make homemade honey and soy chicken 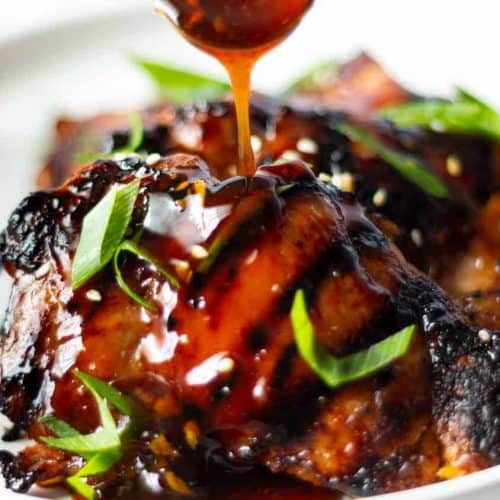